Metrop. Kallistos is to speak at three Oxford Christian societies this week on the topics of Orthodox mission, spirituality and inter-Christian relations. 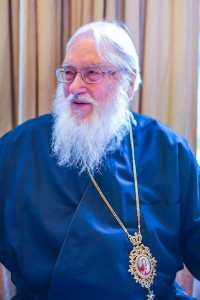 Metropolitan Kallistos (Ware) of Diokleia is one of the best-known contemporary Orthodox theologians. He was the Spalding Lecturer of Eastern Orthodox Studies at the University of Oxford (1966-2001) and is currently president of the Friends of Mount Athos. He is the bestselling author of “The Orthodox Church” (1963) and “The Orthodox Way” (1979) and the English translation of the Greek Philokalia  (in 5 volumes).

On Week 4 of Michaelmas Term 2014, His Excellency will deliver three talks at Christian societies of the University of Oxford.

5 November (Wednesday), 2pm, Pusey House (OX1 3LZ) – “The Mystical Theology of the Fathers: St Gregory of Nyssa”. The event is hosted by Pusey House as part of the Recollection Series.

5 November (Wednesday), 6pm, House of St Gregory & St Macrina (1 Canterbury Road, OX2 6LU) – “The Mission of the Ecumenical Patriarchate”. The event is hosted by the Oxford Orthodox Christian Student Society. This is a second talk in the series “Religion, Society and Politics”.

His Excellency will speak about the role of the Ecumenical Patriarchate in modern inter-Orthodox and inter-Christian relations and global politics. The talk is followed by a wine reception.